Wow, I actually can’t believe that I finally get to do a debrief of my weekend.

Small side note: always insanely jealous reading these because I wanted to be doing it too so badly.

Our dressage ride time wasn’t until 3.20pm, and the venue was just over an hour away, so I had a very relaxed morning and arrived at the show grounds around 11.00am. He unloaded nicely and after a few calls announcing his arrival he settled into his yard with minimal fuss.

I took the time to watch friends ride and get my bearings on the warm up situation. 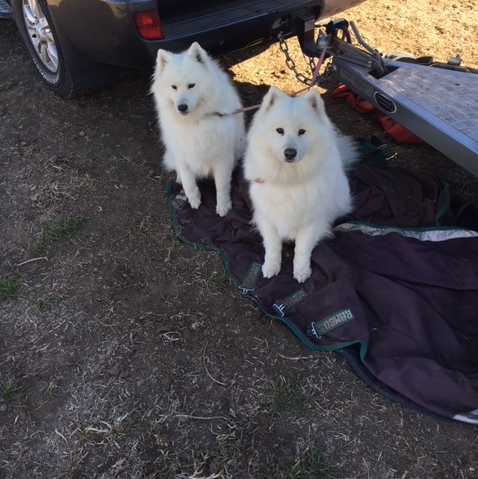 I found these adorable floofs while I was getting my bearings.

The final conclusion lay somewhere between “chaos” and “mayhem”.

Probably about 40 people warming up in that area at one time.

They had 8 dressage arenas running and the warm up to cater for so many competitors going at the same time probably wasn’t as big as I would like to see.

Definitely not on a young horse with limited steering when overwhelmed.

The original plan of a pre-ride and then a short warm up went out the window because I felt the pre-ride would have just been too much for him to handle with the number of other horses around. Instead I opted for a single longer warm up later in the day when there were less horses.

I learned something important this day.

He was definitely frazzled when I first got on, but he did end up settling down and doing some half decent work… and then the ride went too long and he started to frazzle out again even though we spent 90% of the time just walking around.

I had also warmed him up in a quieter area (aka next to the race track) before taking him over to the main ring with our arena in it. He really did not rate the number of horses circling us but, being the best little boy he is, he didn’t do anything but just express a lot of concern on his face.

It did get to the point where I was questioning if I would be able to take him in, and if my spot hadn’t come up when it did I probably would have pulled the plug. It was just getting too much for him.

Surprisingly, he was all too happy to head into the arena to alleviate his claustrophobia and put in some decent work. The test didn’t score well (I knew it wouldn’t) but he walked, trotted and cantered where he was supposed to, there were no hysterics, no bucks or jig jogging and he even halted square where he should of (despite not being quite straight).

That was more than I had hoped for and I was so proud of him!

Pure joy and relief on my face, complete bewilderment on his

We had survived phase one, with both showjumping and cross country to come on the Sunday.

The Bumper Car received many a pat and delicious treats, and I may or may not have had a small tear up at the realisation we had done it.

All photos courtesy of Petrina White