So yeah, this test, the one I liked better.

We got our results back.

I originally was just going to post the test sheet, but I had more fun breaking it down like this…

I found this quite interesting, honestly.

I managed to guess the score within <2% of the actual result, which is a good indicator, and most of my thoughts tended to be within 0.5 of the score.

What seemed to differ is why I thought those marks should be lost. I was focusing more on the accuracy of the test and the steadiness into the contact whereas it seemed her primary issue was the location of B’s rear end. I have to admit this wasn’t something I thought was a huge issue (other than on the C/L – obvs) so I am going to go back and look again.

I may ask a second opinion from some judge friends to see if this is also something they see as being a glaringly huge problem as it’s not something that’s ever been mentioned as an issue in training (other than on the C/L – obvs), so perhaps I just needed my eyes opened to it. 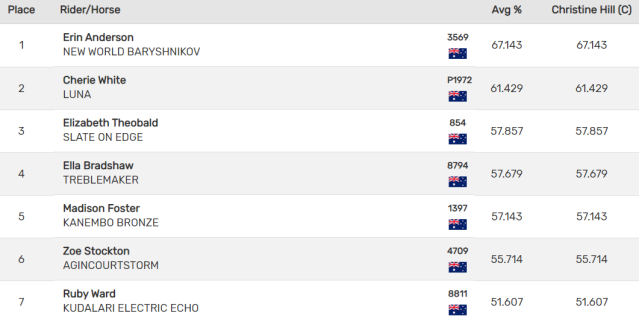 So close to third place!

Solidly middle of the field. And for all of those people who said I was a harsh marker, well it looks like I’m not the harshest one there is, so mwahahah.

I have no idea if we actually get ribbons for this, but I would love that because I love B and he deserves some shiny ribbon for putting up with me.

They seem to be having a bit of a fit trying to get my Prep scoresheet back to me, which is odd, but at the very least I will be able to compare scores. That’s hard because I found the comments the most illuminating. I wish there would have been collective comments, those are my favorite part.