Half of the reason I wanted to do the whole bootcamp thing (aside from the obvious) is because I wanted to get back into a solid and reliable program with a trainer.

The last few years have had my horse situation being so all over the place I had fallen out of my standard weekly/fortnightly lesson commitments and honestly? It showed.

Then vs Now: Then = normal hands, Now = right hand up and left hand down. Why am I like this?

When I was in a normal lesson program everything was getting better, quicker, stronger and it felt like I was going from strength to strength.

My left arm weakness is just so awfully apparent even though I swear it is always on my mind when I ride (maybe not every single second of the ride because otherwise I wouldn’t be able to do anything else, but yeah, definitely thinking about it throughout) and it doesn’t seem to be getting stronger. 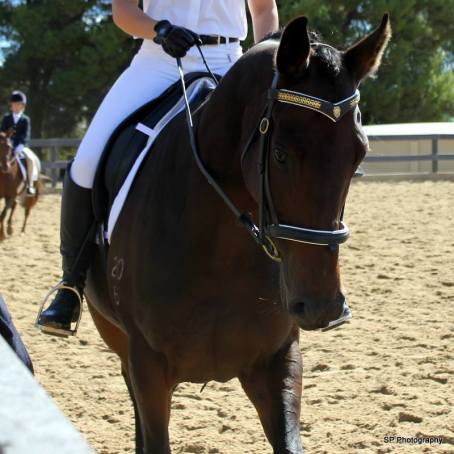 Left hand… plez… come back to me…

I have also had some new bad habits creep in, and it’s just like… urgh.

So, despite B leaving Trainer J’s place on the Sunday, I booked us back in for the following Thursday, and this was actually a big milestone for us.

Because I hadn’t floated B out for a lesson on another property since before his injury in 2018. True, it was a bit of a cheat because he had been there 5 days earlier so it wasn’t completely new but, whatever.

I am giving this one to myself.

I’d fallen into that trap of telling myself we would go somewhere for a lesson “when we were ready”. Pffffffffffffft. Like that exists. So, big girl panties were on and the lesson was booked, and off we went with little thought on the matter.

Spoiler alert: he was exceptional.

B is an absolutely wonderful horse to float, he stands so quietly and self loads/unloads with little input required from me. I got there with enough time to tack up and set up the Pivo without rushing, and then jumped on for a casual stroll around the arena until Trainer J was ready for us.

It was so reaffirming to hear how far he had come in the week he had been back home, and we started practicing some new stuff now that he was more consolidated with the initial exercises – yay!

After our lesson, he floated home (like a gentleman… obvs) and was rewarded with the following day off because he deserved it.

And also because he hadn’t had a day off in *ahem* a while.